After the opening of the conference, the first morning had a very strong Swedish accent.

It started with a panel talking about ”Ellington in Sweden 1939”. Participants in the panel were Alice Babs, Rolf Dahlgren, Bertil Lyttkens och Hans-Henrik Åberg.

Thanks to a change in the program, the audience could then enjoy an improvised concert by the Swedish pianist Berndt Egerbladh, who also brought Alice Babs onto the stage.

The morning session ended with Benny Åslund  – appropriately – giving his greetings to the conference and showing some of his films of the Ellington band’s visits to Sweden.

After almost two years of preparations, the official opening of the Ellington ’94 conference in Stockholm  took place on May 20, 1994. It was the 12th one in the series of Study Group Conferences.

The conference was opened by Göran Wallén, Chairman of the organizing committee and of The Duke Ellington Swedish Society, and Alice Babs.

The night before, the participants had got acquinted at a ”Get-Together-Party” at the Scandic Hotel, where the conference took place, and had time to read the 40 pages program provided to all.

Göran Wallén has kindly provided the DESS website with the story how ”Stockholm ’94” came about. Below is a summary in English. The full version in Swedish is available in the Ellington Archive.

”The 10th Ellington Study Group Conference took place in Copenhagen on May 19-22, 1992. We were some 30 Ellington-interested participants from Sweden. During the first night of the conference, Arne Domnérus and Bengt Hallberg played at the Montmartre Jazz Club together with Clark Terry, NHOP and Peter Danemo.

During the conference, I talked to Leif ”Smoke Rings” Anderson – the well-known radio voice and jazz journalist with a particular interest in Ellington. I had known him for several years and I told him that I was thinking about doing a similar conference in Sweden.

I asked him if this could be done and his direct answer was “It can’t be done; it is too much work; we will not manage.” I replied: “But if the Danes could do it, why not the Swedes? Shall we arrange the conference in Malmö (where Leif lived)”, I asked? “No, it is not possible”, he said, “Then we have to do it in Stockholm” I replied, and that was how it came to be done. But Leif was not convinced and very skeptical.

Back in Stockholm, I brought together Rolf Dahlgren, Olle Lindholm and Lennart Landström, who had been with me in Copenhagen, to discuss the idea. They were all very positive and we shared thoughts on how to make it happen.

The 1993 Ellington Conference was already scheduled to take place in New York so we decided to go for 1994, which would give us time to organize the conference and find the funding needed.

After the meeting, I told Benny Åslund about our intentions and he was very positive about having a conference in Stockholm.

In August 1993, I went to New York together with Alice Babs and a couple of others to participate in the 11th Ellington Study Group Conference (August 11-15, 1993). There Alice and I presented the program for Ellington ’94 in Stockholm the year thereafter and we got very positive responses. 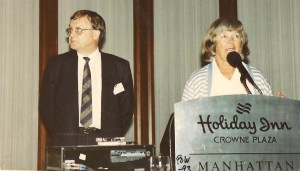 In the end, more than 250 delegates from 22 countries came to Stockholm.

By that time a lot had happened in terms of getting the conference in place.

Organizations and government agencies in the field of arts and music like the Swedish Radio, the Swedish Performing Rights Society (STIM), the Swedish Arts Council, the Swedish National Concert Institute and many others had started to realize what was going to happen and had come on board. They worked with us to make the conference a large-scale jazz event in Stockholm with concerts and club performances all over the city.

We had also secured funding for the conference thanks to support from local and regional authorities and sponsorships from different kinds of industrial companies, a bank (Nordbanken/Nordea), an insurance company (Wasa) and SAS, which provided tickets for our American guest musicians. DagensNyheter provided us with generous space for ads in the newspaper.

After the New York announcement of the conference all the practical work accelerated. The initial group of four had expanded to 12 people, each responsible for a particular set of tasks. It got some good help from Åke Edfeldt, who had agreed to be the presenter during the three days and also from Carl Gunnar Jansson, Lars Westin and Jan Bruér from the Swedish Jazz Federation. Early in the project, Alice Babs and Leif Anderson had accepted to be conferenciers at the concerts. I was very happy when Leif in one of our conversations said: “I was wrong regarding an Ellington conference in Sweden. It looks like it will be a success.”

The illustrator and author Olle Snismarck designed the logo for the conference and for DESS.

So when the date for the opening of the conference approached, everything was well prepared. More than 250 participants from 22 countries had registered and the concerts in the Stockholm Concert Hall and the Swedish Radio Concert Hall (Berwaldhallen) were sold out.

At 9 o’clock on May 20, 1994 I had the pleasure to open the conference together with Alice Babs and then followed three days full of presentations, concerts and other events. A nice surprise was the spontaneous concert that Alice Babs and Kenny Burrell provided at the luncheon at the Stockholm Town Hall.

The conference ended with a gala dinner with dancing to the music of Kustbandet and one of the conference participants, Austin Lawrence, who had toured with Luis Russell in the 1940s added to the entertainment by stepping up to the microphone to sing Call of the Freaks with Kustbandet. 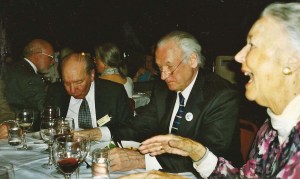 At the end of the conference, we heard many nice words from the participants. Among them was Klaus Stratemann, who called it an “extraordinary conference”.

The conference was also a financial success. It had a surplus of almost 300.000 Swedish Crowns, which provided the base for setting up a Swedish Duke Ellington society.

All Swedish participants in the conference were invited to a founding meeting on May 22, 1994 at the Castle Hotel and the new organization was given the name “The Duke Ellington Swedish Society” which was later changed to “Duke Ellington Society of Sweden”.

So this is the story about the conference. Ten years later another Ellington Study Group Conference took place in Stockholm but that is another story.”

The Hawk Talks,  Louie Bellson’s probably most famous composition played by his own All Star Orchestra in 1992

Very recently DESS members received DESS Bullentin nr 4, 2017, in which Louie Bellson is featured prominently. In 1996, Monk Rowe of Hamilton College Jazz Archives, conducted a TV interview with Bellson in Sarasota, Florida and we are  happy to give you the opportunity to listen to this nice personality talking about his long career as a drummer, composer, arranger and band leader. Enjoy!

The new issue of the Bulletin has been published and is on its way to DESS members. As usual, a lot of good and interesting reading.

The feature articles this time is about Louie Bellson. Over four pages, Bo Haufman, who had met Bellson personally, paints a portrait of him. He gives us Bellson’s career and his time(s) with Ellington but also Bellson -the drummer and Bellson – the composer. A separate article descibes Bellson’s drumkit as it was circa 1952.

The new issue also has another article by Fred Glueckstein related to early Ellington films. This times it deals with Fredi Washington – the co-star in the film-short ”Black and Tan”.

These are the articles in English this time but for those, who able to read Swedish, there are another four to enjoy. One gives snapshots of what the local press wrote about Ellington’s 1963 tour and another is a reprint from the Swedish jazz magazine ”Estrad” from April 1947, in which Nils Färnström tells about his visit to Harlem and particularly to Apollo Theatre.

The other two articles in Swedish come from the hand of Bo Haufman. One is about Bojangles and the other a review of a concert by Stockholm Swing Stars ”In the Spirit of Duke Ellington” in September 2017. 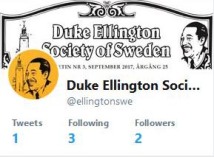 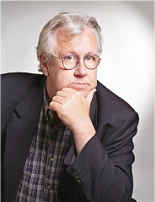 In last week’s article on Billy Strayhorn’s ”Chelsea Bridge”, Walter van de Leur was quoted as saying in his book ” Something to Live For, The Music of Billy Strayhorn”, that ”an unissued broadcast from the Casa Manana, Culver City” is “the only known full recording of Chelsea Bridge by the Ellington Orchestra.”

That was said before Joe Medjuck spotted that a full version was also played in the broadcast from Radio City in New York on September 8, 1945.

For DESS members who would like to compare the two ”full” versions, the broadcast from Casa Mañana in Culver City, CA on Feb. 20, 1941 is the second ”goodie” for November together with three songs from a broadcast made at  Trianon Ballroom, Southgate,CA, in June 1941. They are available for listening and downloading in the ”Current Goodies” section.

Our program starts with four surviving numbers from an MBS broadcast of Feb. 20 1941. The opening number is Are You Stickin’, which was obviously written for Barney Bigard to show his technical brilliance on his clarinet. Although the announcer nicknames him ”Speedometer”, Barney plays this number in a relatively slow tempo.

The main reason for presenting this program is to make it possible for our members to get access to both the recordings of Chelsea Bridge which Walter van de Leur was referring to in his book about Billy Strayhorn. (The first one was presented last week). Most people associate this composition with three people: Duke, Billy Strayhorn and Ben Webster. Webster made his interpretation stick, but it must be said that also Paul Gonsalves, later on, made a lasting impression when playing this tune.

Another Strayhorn original comes next: Love Like This Can’t Last, sung by Ivie Anderson. This number was shortlived, there are only three known recordings of it, all from 1940.

The last number we play from this broadcast is Moon Mist, composed by Duk’e son Mercer. This is in many ways an interesting performance; it is the first recording of this song,  Ben Webster plays a long solo and we hear Wallace Jones playing muted trumpet and it continues into Take The A Train as a sign-off. Later on, Ray Nance would play a violin solo and it would be used as a radio sign-off theme.

As a bonus for DESS’ members, three numbers from a broadcast at Trianon Ballroom in Southgate, California in June 1941 are also included in this month’s ”goodie”.

Again a rare performance: It’s Square, But It Rocks (by Freddie Slack and Carl Sigman) has only been recorded on two occasions (within a week or two) by Duke Ellington and his orchestra. It is sung by Ivie Anderson. The next tune, In A Mellow Tone, in contrast, has become a well-known jazz standard. Johnny Hodges and Ray Nance are the soloists.

In 1940 Duke had often used Sepia Panorama as his theme song but at the time of the Casa Mañana engagement, in early 1941, Take The A Train had been added to the band’s book. The first surviving live recording using this song as the theme comes from the Casa Mañana dance date on Feb. 16, the day after the first famous Victor recording was made The first ever recording was made exactly one month before that for Standard Transciptions.