The second  ”goodie” in May is program 24 in the Duke Ellington series broadcasted by the Danish Radio in the mid-1980s to the mid-1990s. The broadcast is available in the ”Goodies” section of the website. 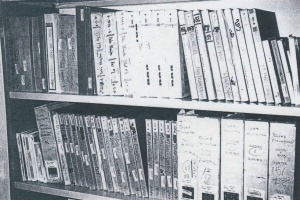 The program was broadcasted on July 5, 1985 and Ib Skovgard is the announcer also in this broadcast.

It is a broadcast similar in format to the one heard on June 28, 1985 – a mixture of excerpts from live concerts and snippets of interviews with Ellington.

It has three more selections from the Munich 1958 concert, which was featured also in broadcast 23. This time ”Jeep’s Blues”, part of the ”Medley” and ”Diminuendo and Crescendo in Blue” are heard.

In the interview in Japan, Ellington demonstrates a rare outburst irritation when he was asked what he considered a political questions and he did not want to answer these kind of questions.

The interview in Los Angeles is a joint interview with Billy Strayhorn, in which they play ”Take The ”A” Train” together on one piano.