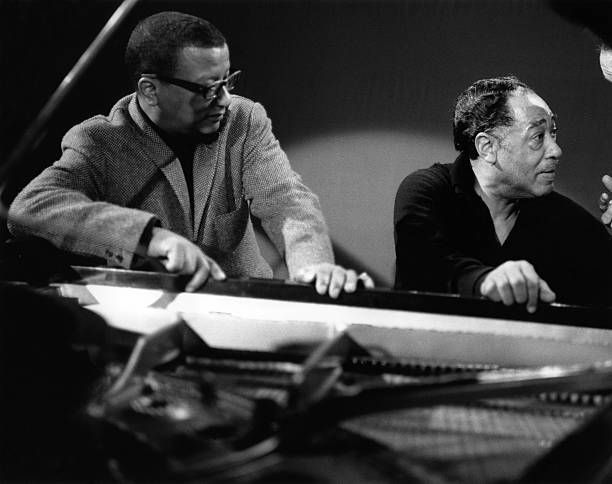 From the early Fifties we have a privately recorded performance from a Fraternity Party in Madison, Wisconsin, believed to be from the end of 1953. Despite a bit of distorsion in the recording, this is quite an enjoyable performance by the two piano players. Duke is the main player, but in the middle of the tape, Billy Strayhorn plays three tunes, which makes possible an interesting  comparison  between the two piano styles. If they sometimes are are difficult to distinguish from each other when composing or arranging music, they are much simpler to keep apart when playing the piano. Click on the arrow below and you’ll be listening to Duke, playing one of his originals called Falling Like A Raindrop, a rarely played composition, only encountered three times in the New Desor discography.

Timner attributes the first few piano chords of the number starting the session, Deep Purple,  to Jimmy Hamilton, before Duke takes over at the piano to play Deep Purple, Falling Like A Raindrop and Sophisticated Lady.Billy Strayhorn steps in to play three tunes. The first one is unknown, but may be his own composition Drawing Room Blues.  He thereafter goes on to play  You Go To My Head and his own Lush Life.

Duke comes back to play Mood Indigo and then goes back to Falling Like A Raindrop again. The latter tune has only been recorded three times, of which this session has two, the third being issued on a Capitol recording in early 1954.

Janet comes next, followed by a short version of The Clothed Woman. Duke then finishes the session by playng What More Can I Say?, which normally would be sung by Jimmy Grissom, but not in this case. This tune has a certain similarity to Do Nothin’ Till You Hear From Me. Maybe the chords are the same?

DESS members will find the complete session in the Goodies Room. We hope you like it!