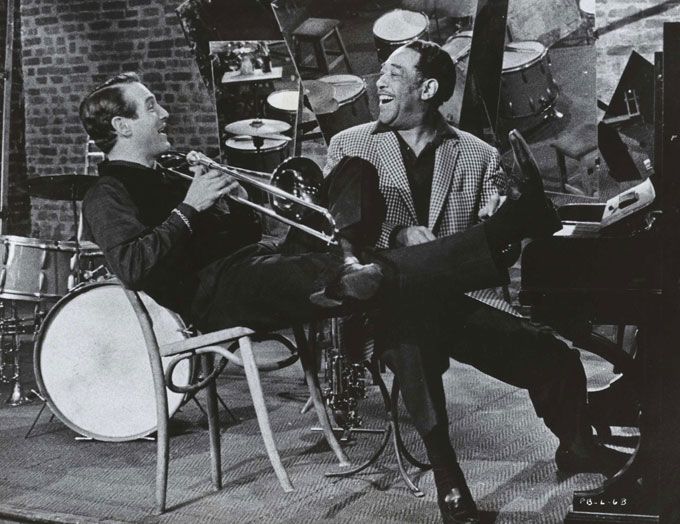 In this film from 1960, Paul Newman acted in the role of a trombone player, but the one who was actually playing this horn was Murray McEachern, a well known instrumentalist, who in the past had played with Paul Whiteman and with the Casaloma Orchestra.

One wonders why Ellington chose to use Murray McEachern for this event, when Lawrence Brown obviously was available too. Anyway, this recording session is a mixture of small and big band performances, with ”Duke Ellington Group” starting off with one version of Paris Blues.

The regular big band with an unknown guitarist then plays Big Bash, with solos by  Ray Nance, Lawrence Brown, Paul Gonsalves and the unknown guitarist. This is the only known recording of this title, although similar to later works by Duke.

A duo, Murray McEachern and Billy Strayhorn, plays another version of Paris Blues, before Duke sits down at the piano to play a solo rendition of Clothed Woman.

The regular big band, with Murray McEachern added and Billy Strayhorn replacing Duke at the piano then performs a third version of Paris Blues.

The three last numbers are played by ”Billy Strayhorn Group”. This group consists of  McEachern, Gonsalves, Strayhorn, Bell, Woodyard and the unknown guitar player. The group starts with Sophisticated Lady, which is sung by Nan Wynn, a singer and actress mainly active in the 30ies and 40ies. The group continues with Mood Indigo, to finish off the session with an instrumental version of Sophisticated Lady.

There is some confusion over the circumstances around these recordings, as well as who the unknown guitar player might be. Barney Kessel has been suggested, but only short sequences are heard from the guitar, so this makes it difficult to judge.

You will find the complete session in the Goodies Room.