There was much live music at the Ellington ’92 conference. May 28 was Ellington Nights at many clubs and restaurants in Copenhagen.

Then there was the Gala Concert on May 29 with many well-known jazz musicians like Abdullah Ibrahim, Svend  Asmussen, Jesper Thilo, Clark Terry, Buster Cooper, Arne Domnerus, Bength Hallberg, The New Jungle Orchestra and others were participating.

A second Gala Concert took place the following day with The Danish Radio Big Band as main feature. There was also a late night Ellington Ball for conference attendees only.

Unfortunately, no recordings of the musical events exists but Bjarne Busk took a lot of photos, which he has kindly made available to the website.

The reception which kicked off the conference was also a musical event. It took place at Woody’s at Bolten restaurant in the center of Copenhagen and the Danish/Swedish/American group Jan Kaspersen Septet provided the music.

One of the bands, which performed at the Ellington Nights event on May 28, was Ancher Grøn Big Band. This young Danish big band played a four-hour concert.

For the occasion it had enlisted Mercer Ellington as conductor and Willie Cook as one of the main soloist. In addition to original or updated arrangements from the Ellington repertoire, Mercer Ellington and Bengt-Arne Wallin contributed works. 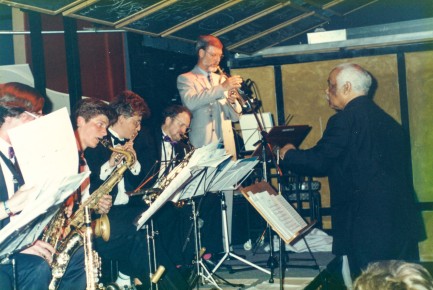 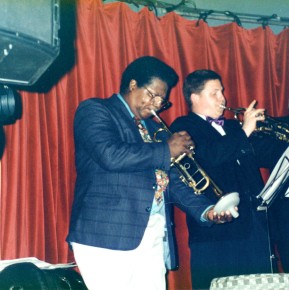 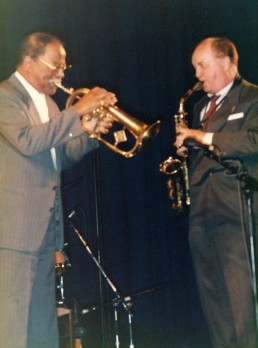 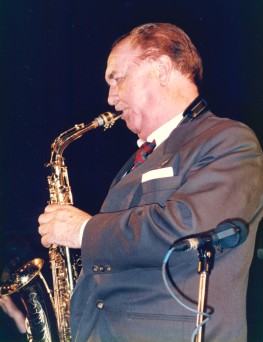 The band was actually very busy during the conference and also played at the two Gala Concerts and the Ellington Ball.

This was also the case for The Ellington Combo with Rolf Ericson, Buster Cooper, Jesper Thilo, Kenny Drew and shifting Danish bass and drum members. 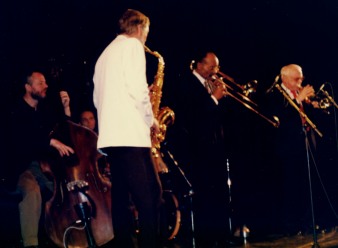 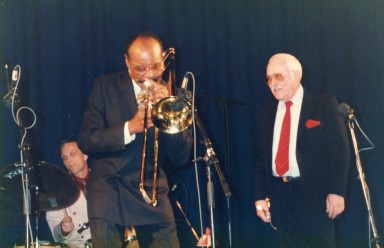 At the Ellington Nights they played at De Tre Musketerer (The Three Musketeers). Then the band went on to the Gala Concerts and the Ellington Ball.

Andrew Homzy made another interesting presentation at the Copenhagen ’92.

This time, his focus was the collaboration and creative process between Ellington and Billy Strayhorn.

He had studied the manuscript scores in the Ellington Archives and used them to provide insights into the process.

Homzy had selected examples from 21 songs to comment upon but because of lack of time he went more deeply into only some of them.

They were, among others, Something To Live For, Barney Goin’ Easy, Take The ‘A’ Train, Rocks In My Bed, Tell Ya What I’m Gonna Do and Memphis Blues.

The audience benefitted from slides with scores that Homzy had prepared for his presentation.

Unfortunately, we do not have access to them except the one for Rocks In My Bed which was among the handouts provided to the conference participants.

Rocks In My Bed 1

The discussion on the compositional interplay beetween The Monster (Ellington) and Sweetie Pie (Strayhorn) continued at the next Ellington Study Group conference – the one which took place in Stockholm in 1994.

Having also studied the material in the Ellington Archive, Walter van de Leur, provided another presentation on the topic. Here is the link to the presentation

He had some different views from Homzy, which he, of course, further discussed in his book Something To Live For.

Bill Hill: Portraits of The Duke

William (Bill) F. Hill, who was the chairman of the Ellington ’91 conference and participant in other Ellington Study Group conferences before that, contributed to Ellington ’92 as well.

He had systematically collected during a three year period compositions written and performed with the purpose to do hommage to Duke Ellington. They all reflected some aspects of him and the Ellington orchestra.

He reported on this work of love to the participants in Copenhagen. In his presentation. Hill plays excerpts from some of them and together will Andrew Homzy he introduced them.

Because of the recording and microphone setup in the conference hall, the balance between the spoken presentation and the music is not the best (to put it mildly) but the music parts has been edited to increase the volume on the original tapes.

Hill handed out a two-page list of what he found had to the participants at the Copenhagen conference. It included almost 70 works written and recorded by 30 different artists. Worthwhile reading! 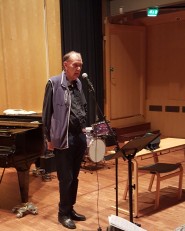 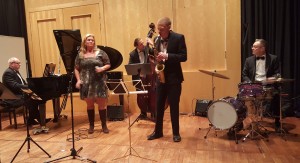 Don’t Get Around Much Anymore

All Too Soon och

I Let A Song Go Out Of My Heart

Alexandre Rado on Ellingtonians in Paris

Alexandre Rado was a key component of the international community of Ellington experts until his too early death in 1997. He was a friend of many members of the Ellington band, a frequent presenter at Ellington conferences and a record producer of immense importance.

His first appearance at an Ellington conference was the Copenhagen ’92 one. The topic for his presentation was Ellingtonians in Paris.

Under this heading Rado gave the conference participants examples of records made by Ellingtonians when the Ellington orchestra visited Paris or during stays of their own in the city after 1974.

Particularly featured in the presentation are – as can be heard below – excerpts from recordings by Cat Anderson, Alice Babs, Buster Cooper, Paul Gonsalves and Sam Woodyard.

Cat Anderson was a special friend of Rado’s and his presentation at the Ellington ’94 conference was focussed on ”The Cat”. It can be heard and seen here.

After the article published on March 21 with a radio broadcast from Towne Casino in Cleveland, DESS member Sonja Svensson has told us more about the club. She studied for a year at Western Reserve University in 1961 and spent many nights at the club.

This link to the blog Jazzed In Cleveland tells that Duke Ellington played some 40 times in and around Cleveland.

A complete index to the blog is available here.

The Spring 2019 issue of Blue Light reached its subscribers a couple of weeks ago. It has been put together by an interim editorial group waiting for Patrick Olsen to take over as editor with the next issue.

The main feature is a very interesting ten-page article titled The Protean Imagination of Duke Ellington – The Early Years. It is written by a certain A.J. Bishop of whom not much is known. In addition to the article reprinted from Jazz Journal in the new Blue Light issue, only two other articles from Bishop’s pen are known. They can be found in Mark Tucker’s Duke Ellington Reader.

Monsignor John Sanders is remembered in two articles by Roger Boyes, who also reviews the Heading for Newport CD issued by Doctor Jazz.

Last week Bill Saxonis was featured on station WCDB and its Saturday Morning Edition of Jazz for 19th consecutive year with his Ellington birthday bash. This four hour long program with program host Bill McCann had – as always – a lot to offer. The DESS website is very happy to have been able to serve Bill with some material for the broadcast.

Two one-hour installments is available in the website’s Ellington Archive and two more will be added later.