Broadcasts from The Hurricane Restaurant 1943 part 2

A busy night at the Hurricane

We are continueing our presentations of rare broadcast recordings from the Hurricane in 1943. Here is a file with 35 minutes of music by Duke Ellington & His Orchestra.

Starting with a Mutual broadcast from May 1943, (Desor4315a-e)) where a couple of new names appear in the sax section, Sax Mallard on clarinet and alto sax, and Scotty Scott on alto, replacing Otto Hardwicke. The first tune is Cabin In The Sky, unfortunately incomplete, but with a nice solo by Ben Webster, followed by In A Mellotone and I Don’t Want Anybody At All, sung by Betty Roché. Two more numbers from this session are Barzallai Lou with a cornet solo by Rex Stewart and Don’t Get Around Much Anymore which was commonly played at this period to round off the broadcasts. Of these, Cabin In The Sky and Barzallai Lou have been previously issued on on LP, Caracol-435. END_OF_DOCUMENT_TOKEN_TO_BE_REPLACED

Broadcasts from The Hurricane Restaurant 1943 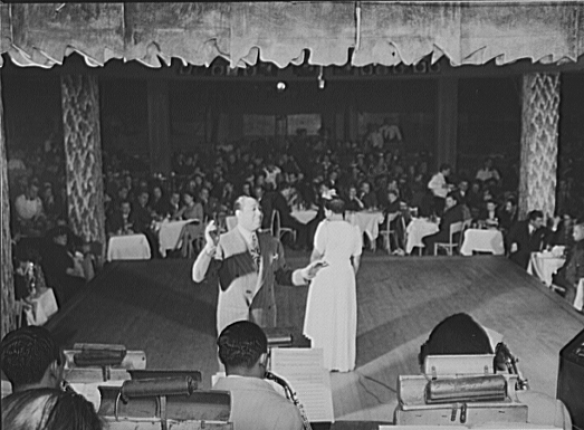 Photo from The Hurricane Restaurant in 1943

Duke Ellington and his orchestra spent many weeks playing nightly at the Hurricane in 1943, 1944 and after it was reopened as The New Zanzibar in 1945. A great number of broadcasts from the restaurant have survived and many have been issued on LP’s and CD’s. There are still many such recordings that were never issued commercially, but circulating among collectors, and we therefor would like to present some of these to the DESS-members. Sometimes the sound quality is not very good, but one realizes this could be the reason that they were never released commercially. We know however that some of these items could be interesting to listen to for some of our members.

The Hurricane was a venue that provided music for dancing, and the repertoire was especially suited for this, hence real jazz numbers were not so abundant, but vocal numbers in the romantic vein were common. During this period Ellington had a number of female singers in addition to boy singer Al Hibbler.

Below, you’ll find a program of approximately 25 minutes of music, coming from the Hurricane.

The first radio date we present is an MBS broadcast from April 7, 1943, (DESOR4305). We can listen to five more or less incomplete numbers: END_OF_DOCUMENT_TOKEN_TO_BE_REPLACED