The 8th Ellington Study Group conference took place in Ottawa on May 17-20, 1990. It was the second one organized in Canada. The first one there was in Toronto in 1986 (5th). 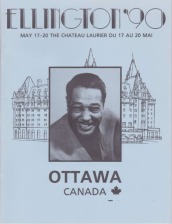 The conference was well attended and it had the biggest number of participants at an Ellington conference until then.

Music played an important part at the conference. Andrew Homzy brought his Jazz Orchestra from Montreal and it performed every evening of the conference.

The third concert, which ended the conference, was titled Good Time Train Is Leavin’ and Andrew Homzy Jazz Orchestra performed seldom-heard Ellingtonia together with guest soloists.

DEMS published a report from the conference in its 1990-3 issue. It was written by Susan Markle of the Duke Ellington Society Ray Nance Chapter in Chicago and most likely  it was originally written for its newsletter.

Sjef Hoefsmit participated in the conference and filmed most of it. The result was nine Video 8 cassettes. The only event that was not filmed was the final concert. Unfortunately, time has affected most of the cassettes so the picture quality is quite low. However, the sound quality is fairly OK but the balance of the spoken sound of presenters and the recorded music they used to illustrate the presentations is far from ideal.

All the video cassettes digitized and edited so far are in the section Presentations.

There also exists 7 cassette tapes found in the Benny Aaslund Collection admistrated by DESS. They are most likely copies of the sound track of the videos and provided to Aaslund by Hoefsmit.

The website has published 10 articles about the conference. They are:

A Tone Parallel to Harlem